As a country, the United States is arguably the most economically successful and powerful in the history of modern man. We have survived and flourished, adapting into the world’s largest economy. However, despite our success, our economy continues to experience massive ups and downs. In this blog, I propose a theory that, unlike past boom-bust cycles, this boom may be different: our country—as in prior eras of the silver age, transportation/industrial revolution, the communications/internet revolution—is once again on the precipice of performing a feat known as “jumping the S-curve.”

Harvard University economists, Paul Nunes and Tim Breene, conceived the concept of “jumping the S-Curve” to describe the behavior of companies that remained at the top of their industries, year after year. They argued that the natural course of many successful businesses is an “s-curve”: successful growth followed by a leveling off due to saturation or maturity within a given market, followed by an industry breakthrough and more growth. Nunez and Breene advocate and describe methods for businesses to jump to the next curve, the most important of which is identifying a “big enough market insight,” or BEMI, on which to capitalize and invest resources. Growth within the acquired curve is predicated on retaining talent and high performers within the firm to keep the business lean then jumping to the next S-curve which is contingent on identifying the fading power of a BEMI and the decline of its distinctiveness. Those who wish to jump to the next S-curve must think on the edge in terms of strategy, organization and the market, and must adapt to the market before business performance begins to plateau. Providing tips both for climbing the S-curve and jumping to the next one, the authors cite case studies such as Porsche’s BEMI in entering the SUV market with the Cayenne.

Rather than focus solely on firms, I would like to apply the concept of “jumping the S-curve” to describe the behavior of successful countries within the global marketplace. At the moment, the country that best describes this behavior is the United States. Historically, the United States has not always experienced solid growth; of course, we have undergone significant boom-bust cycles in recent decades. The National Bureau of Economic Researchers has been tracking American boom-bust cycles since 1854.  Over the past 163 years, the average length of a complete boom-bust cycle is 56.4 months (4.87 years); however, since 1945, the average length of a complete cycle has increased to 68.5 months (5.70 years).

The two most recent booms can be attributed to the Dot Com bubble of the late 90’s and the Housing bubble that burst in 2008. However, the more long-term trend of stable economic growth since 1945 is widely attributed to the worldwide economic expansion that lifted Western Europe out of the destruction wrought by the Second World War. 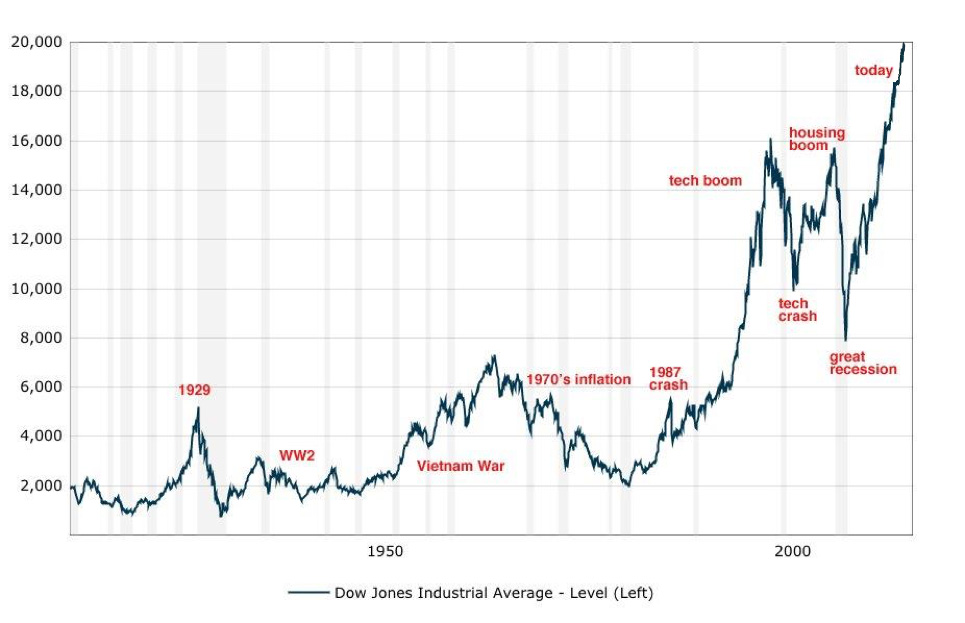 The economy in which we live is more globally connected than ever. Developed countries are becoming increasingly open economically, as traditional barriers to international trade, like geographic distance, linguistic barriers, military factors, and tariffs, are becoming less potent in developed countries because of recent advancements in aviation technology, global education, and reduced policy barriers to international trade.

Consequently, more goods, services, and capital are flowing across borders than ever before.  Increasing globalization can be demonstrated quantitatively by a multitude of measures.

One can demonstrate globalization in financial markets by observing the correlation of US and foreign stock markets, as University of Zurich and Georgetown University researchers demonstrated by a controlled multiple regression of the “Quinn-Toyoda measure of openness” on the correlation of main stock market indices in 120 country pairs in their 2008 study.  In “A Century of Global Equity Market Correlations”, Dennis Quinn and Hans Voth showed that global stock market correlations have risen from 10% in 1893 to about 80% in 2005, indicating that for any pair of countries, the variance in stock prices of one country can be 80% explained by the variance in stock prices of the other country. This financial correlation is mostly explained by the breakdown of the Bretton Woods system

Put in place after WWII, the Bretton Woods system forced member countries to tie their currencies to gold and heavily restricted cross-country flows of capital. Proving the correlation of economies, when the US famously unpegged our currency from the gold standard in the early 1960’s, shortly thereafter, in the 1970’s, the rest of the developed world followed suit culminating with the UK eliminating capital controls in 1979 following the election of Margaret Thatcher.  While increasing correlation in global financial markets might frustrate investors following traditional strategies, global portfolio diversification is becoming increasingly irrelevant. As all stocks fluctuate together, diversification does not significantly decrease risk and may not significantly increase overall return.

The common aphorism for economic globalization is the “tide that lifts all boats.”  This metaphor is true in that economic globalization empirically decreases income inequality, enriches poor, developing countries, and leads to higher rates of growth for developed countries.  Basically, real income in the developed world rises as economic globalization increases.  This notion is based in both classical theory—Adam Smith’s “gains from trade” and “division of labor” principles—and the more recent “New Trade Theory,” which takes into account imperfect competition, increasing returns to scale, and changing technology.

Despite all the theoretical and empirical evidence to the contrary, President Trump is in the process of implementing an economic plan based on “America First” principles that appear to be actually creating even more prosperity for the United States.  Current evidence points favorably to the first two months of Trump’s presidency.

According to the Bureau of Labor Statistics’ February 2017 jobs report, total non-farm payroll employment increased by 235,000 in February with employment gains in construction, private educational services, manufacturing, healthcare, and mining. Although the futures market took a tumble just after Trump’s election, US stock exchanges have rebounded sharply and continue to rise under Trump.

The Dow is up 4.56% and the S&P 500 is up 5.53% year-to-date as of April 1st, according to CNN Money.  Despite arguments to the contrary, including Citigroup’s claim that a Trump win would send the S&P 500 down 3 to 5% and Bridgewater Associates’ claim that the Dow could fall by 10%, Trump’s presidency has so far proved to be a blessing, rather than a curse, for the stock market.

Although many of Trump’s policy stances are fluid and unpredictable, his fiscal policy is relatively stable and pro-business.  Among his pro-business initiatives are moves to roll back Dodd-Frank regulations (by issuing an executive order that “paves the way” for reversing the fiduciary rule) and EPA regulations (by issuing an executive order that reverses the clean water rule, which was designed to reduce pollution in major bodies of water). The Fed has recognized the economy’s recent success by raising interest rates on March 15 for only the third time since the financial crisis of 2008.

In fact, the March increase is the second time in just three months that the Fed has raised rates. This is, of course, not all due to Trump as in its press release, the Fed implies that the economy’s “moderate pace” of expansion is a continuation of a trend that began before Trump, not a new trend caused by his presidency. Moving forward, Trump plans to spend heavily on infrastructure as he recently announced the unveiling of a $1 trillion infrastructure plan later this year while simultaneously cutting heavy corporate tax rates to about 15% from the current 35%. Trump’s plans to cut taxes and increase government spending could send the economy to an “unsustainable growth pace,” by Fed standards, which could lead to faster increases in interest rates.

While the dollar has actually decreased in strength relative to foreign currencies—the USDX/US Dollar index, which measures the value of the US dollar relative to a basket of six foreign currencies, is down 1.82% year to date—foreign investment in the US continues at a steady pace with the biggest foreign investments coming from China in US commercial real estate markets. If the dollar’s value remains low, relative to other currencies, more foreign dollars will continue to flow into the US, and the cycle of growth will continue.  However, if the Fed decides to continue raising interest rates in order to counter Trump’s policy initiatives, we might see a reduction in the current rate of growth.  Based on historical predictors we are overdue for a bust/bear market, and a slow-motion collision of the Fed’s and Trump’s policies might be the start of it.

While no one has a crystal ball to predict the economic conditions of the next four years, President Trump is certainly making prudent decisions in anticipation of future trends.  He enlisted Tesla and SpaceX entrepreneur Elon Musk in his advisory council and continues to receive business advice from Palantir, PayPal, and Facebook entrepreneur Peter Thiel.  As the world is at the tipping point of automation, Trump could be utilizing ideas from his more tech-savvy counterparts to bring manufacturing jobs back to the United States.  He plans to invest in infrastructure in a time when transportation is undergoing a massive paradigm shift to self-driving cars.

While no one expected Trump to win, he won.  While no one expects Trump’s policy of economic isolationism to prevail, it very well may if things continue as they are.  While history would indicate we are overdue for a bust, we have not busted.  Perhaps Trump’s policies of repealing Obamacare, removing regulation and investing in US jobs and infrastructure will enable the United States to “jump the S-curve” to its next period of upward growth without a bust.